Our experts will reply you very soon.

* Mentioned prices may vary depending upon date of travel, hotel availability, surge pricing and seasonal rush.

The Andaman Islands are an Indian archipelago in the Bay of Bengal. These roughly 300 islands are known for their palm-lined, white-sand beaches, mangroves and tropical rainforests. Coral reefs supporting marine life such as sharks and rays make for popular diving and snorkeling sites. Indigenous Andaman Islanders inhabit the more remote islands, many of which are off limits to visitors

We make your dreams of an exotic vacation come true

We give you the freedom to customize your trip

Our representative will receive you at Veer Saverkar Airport, Port Blair and will escort to the hotel, he will also assist you to do hotel check-in formalities. After check-in and little relax, you will be taken to the following places.
Corbyns’ Cove Beach: The Corbyns’ Cove, is a serene and unspoiled soft sandy beach, set in picturesque background of lush green coconut palms and pleasant blue sea. The main attractions of this beach are the inviting water sports. The Corbyns’ Cove beach, situated 8 kms from the City centre is the closest Beach from the city. This coconut- palm fringed beach, is ideal for swimming and sun bathing.
Cellular Jail: This historic building was built in the 19th century to look like a wheel with seven spokes. Today only three wings of the seven remain. It took 10 years to complete. It is called ‘Cellular’ because it is “Cells beyond Cells”.
Sound & Light Show: At the National Memorial ‘Cellular Jail’ you can attend the Sound & Light Show where the heroic saga of the Indian Freedom Struggle is brought alive by the means of light and sound at the jail premises, presented in English and Hindi, which takes you back to the British Era.
Day 2: 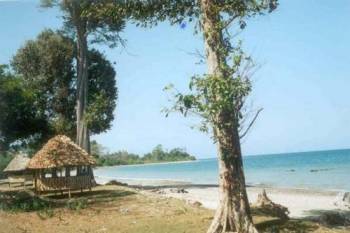 Bharatpur, Laxmanpur and Sitapur . At Evening Via Govt Ferry to Havelock Iland
Day 3: 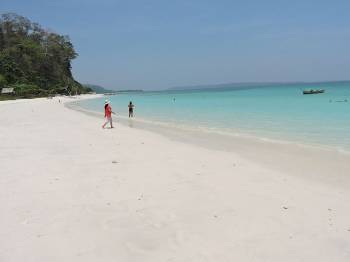 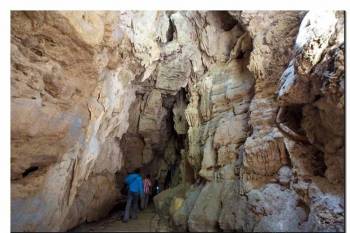 Ross Island
Few miles from Port Blair is the Ross Island, once an administrative headquarter for the Britishers, before an earthquake rocked the Island in 1941. The British then left the island and took settlement at Port Blair, since then the Island could never recover from the decay and neglect which had set in. Slowly but steadily the nature took its toll, as banyan trees engulfed the buildings thus replacing the structures created by man. This island makes you nostalgic and takes you back in time when this was an administrative settlement for the Britishers. The Indian Navy has rebuilt some of the old buildings like the bakery and the local stores, from where souvenirs are available.

North Bay Island
North Bay island is a popular destination in Port Blair. The beach and the snorkeling opportunities in its fringing coral reefs are the closest ones you will find at Port Blair. A ferry will take you across Aberdeen Jetty and bring you back after 3 hour. The corals at North Bay are rather good and spread over large area. You're very likely to spot many fish, a lobster, or even clams on the coral reef.When at North Bay, it is time to relax and enjoy. Options such as Snorkeling, Scuba Diving and Sea Walk are also available
Day 7:

After Breakfast Drop to Veer Savarkar Airport - Back to Home

Back to Home with Sweet Memories